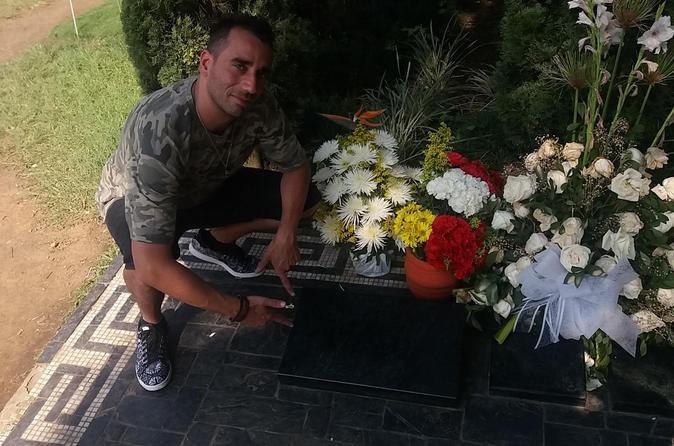 This tour shows the life of Pablo Escobar in 3 days. Beginning with his life in Medellin until arriving at his properties in antioquia, where he spent his last years commit a crime  and hiding from the authorities.( medellin, envigado(la catedral), guatape, and napoles(doradal- antioquia).

We will visit the jail 'la catedral' that pablo build for himself afterwards. A meeting with Roberto Escobar, the brother of Pablo is optional and not always possible.

Day 2 Casa Manuela / Guatape:
On day  2 we will visit Casa Manueala another house Pablo owned.(First picture on this page)
Because Casa Manuela is close to the beautiful town of Guatape. We will also explore this incredible area a little.

*It’s possible to get an accommodation in Guatape and get on to Hacienda Napoles the next day. If not we will go back to Medellin and pick you up on Day 3.

Day 3 Hacienda Napoles:
On the final day we will visit the famous ranch Pablo used to own.
The estate was build and owned by Pablo and covers about 20 km2 (7.7 sq mi) of land. After Pablo's death in 1993, his family went into a legal struggle with the Colombian government over the property. Eventualy the government won and the property is now managed by the Municipality of Puerto Triunfo. What you can find there :

Pablo Escobar Gaviria was born in RioNegro but lived most of his life in Medellin, both in the Antioquia region. That’s why the Pablo Escobar tour is in Medellin, in the city you can still find a lot of places that are the result of Pablo’s doing. The opinions about Pablo Escobar are divided in Medellin. Most of the people have experienced tragic moments relating to Pablo Escobar. He was “The king of cocaine” and the world’s most biggest and important drug dealer, responsible of death and violence everywhere in Colombia. He was also cherished by others who saw him as a charitable human. The drug boss(el patron) ruled under his motto plata o plomo, Spanish for silver or lead.(referring to take money or get a bullet). To many of the city's poorest people, Escobar whom they called Don Pablo was nothing short of El Robin Hood Paisa in the flesh, a reputation he enjoys among some to this day. Paisa is a region formed by the departments of Antioquia, Caldas, Risaralda and Quindío.

This tour shows the life of Pablo Escobar in 3 days. Beginning with his life in Medellin until arriving at his properties in antioquia, where he spent his last years commit a crime  and hiding from the authorities.( medellin, envigado(la catedral), guatape, and napoles(doradal- antioquia).