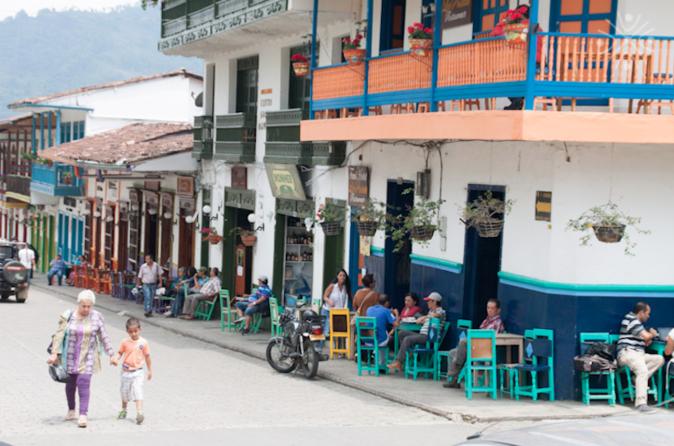 Visit 2 of the heritage jewels villages of Colombia.
Jardín; historically and currently an epicentre of coffee production and trade.
Santa Fe de Antioquia; once one of the most important cities of the country preserves its colonial elegance and quaint lifestyle.

This overnight trip takes you to two of Antioquia’s oldest and most picturesque towns, both with traditional whitewashed and painted houses but different in their appearance and atmosphere.

Santa Fe de Antioquia is the region’s oldest settlement founded in 1541, and known as one of the towns that formed Colombia’s towns as we know them today.
The village Jardín is out second town, which was officially founded about 300 years later and it's different in its structure, colours and climate.

After more or less two hour ride by car, our first stop will be at the Puente de Occidente, or Bridge of the West, as it is situated in the west of Antioquia. Finished in 1895 after 108 years of construction, it was considered the seventh largest suspension bridge worldwide and was declared a National Monument of Colombia later in 1978.

First we’ll admire it from the distance, then we’ll walk over the bridge. Looking at the Cauca River, we'll see a magnificent panorama of the surrounding scenery before we continue our tour to Santa Fe de Antioquia.

We’ll arrive at the main square where we’ll get a first impression of Antioquia’s former capital. Walking past the fountain and street vendors selling their goods, we make our way through traditional cobblestone streets lined with whitewashed houses to a local restaurant to have a delicious traditional lunch.

The next morning we’ll start the day with a typical Colombian breakfast before we’ll get the chance to see more of Jardín and its surroundings.
We’ll stroll down the streets to have a closer look at beautifully painted houses as well as chairs that are pieces of art with hand-painted pictures of the area on them. Then we’ll enjoy a fabulous view over Jardín where we take a gondola to the top of the mountain before we’ll visit a trout farm and a large park near Jardín.

Afterwards we’ll be on our way to get the real experience of visiting a traditional coffee farm and hear about how Colombia’s finest coffee makes its way from a bean to a cup. We’ll learn everything from growing the beans to harvesting and processing them until they can be roasted and are ready to be used for a delicious cup of coffee. We’ll watch as the coffee farmer, or cafetero, prepares the liquid gold and explains different methods of brewing coffee. Then we finally get to taste the delicious result.

Before we are back on the car to return to Medellín, we’ll try another traditional lunch on the coffee farm with the region’s best ingredients.

Visit 2 of the heritage jewels villages of Colombia.
Jardín; historically and currently an epicentre of coffee production and trade.
Santa Fe de Antioquia; once one of the most important cities of the country preserves its colonial elegance and quaint lifestyle.